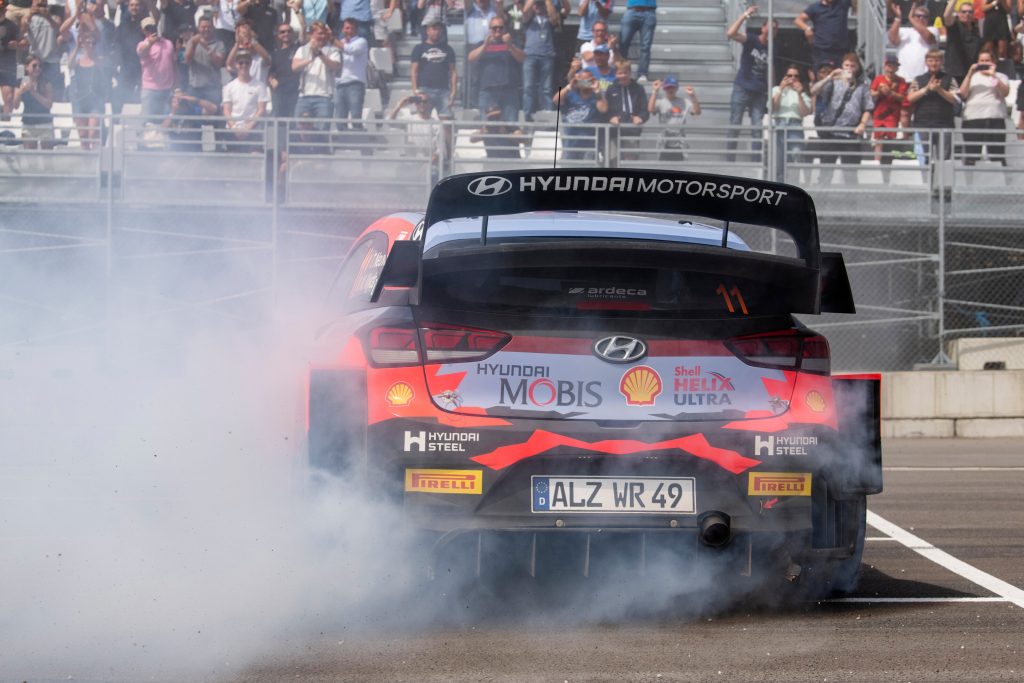 He led for virtually the entire event, fending off a fierce first-day challenge from team-mate Craig Breen. The Hyundai i20 duo then settled for a formation finish after three days and almost 300km of action on narrow Flanders farm lanes and the Spa-Francorchamps race circuit.

Neuville’s winning margin was 30.7sec and marked a first WRC win for co-driver Martijn Wydaeghe. The success revitalised Neuville’s title challenge, promoting him into a tie for second in the championship standings with Elfyn Evans.

After the finish of the final speed test at Spa, Neuville celebrated victory at Belgium’s first WRC round with a series of donuts before saying: “We had a lot of pressure coming here, but I felt quite comfortable all weekend and I could rely on my team and my car.

“It was a pleasure for me to give this first win to Martijn here in Belgium. It should have come earlier, but we were unlucky. It feels good here now.”

Neuville, Breen and Ott Tänak won 15 of the 20 speed tests between them for Hyundai Motorsport and the 1-2 finish enabled the squad to reduce the deficit to manufacturers’ series leaders Toyota Gazoo Racing to 41 points.

Irishman Breen, for whom this was only his second asphalt appearance in an i20 World Rally car, secured back-to-back runner-up finishes after a similar result in Estonia last month.

Kalle Rovanperä finished third in a Toyota Yaris after coming out on top of a frantic intra-team fight with Evans and Sébastien Ogier. The young Finn traded places with Evans all rally and regained third this morning before holding off the frustrated Welshman by 6.5sec.

Ogier’s hopes of a podium place were ended by a Sunday morning puncture. There was consolation for the Frenchman as he extended his lead in the drivers’ championship to 38 points with four rounds remaining. He ended 6.2sec behind Evans.

Tänak was a distant sixth after falling away from the victory fight with a Saturday morning puncture.

Belgium’s demanding roads caused a host of problems. Takamoto Katsuta and Adrien Fourmaux retired after huge crashes while Gus Greensmith and Pierre-Louis Loubet finished well down the order after sliding into ditches on Saturday morning.

Drivers are back on gravel next month as Acropolis Rally Greece returns to the championship for the first time since 2013. The rally will be based in Lamia on September 9-12.

FIA World Rally Championship (after round 8 of 12)